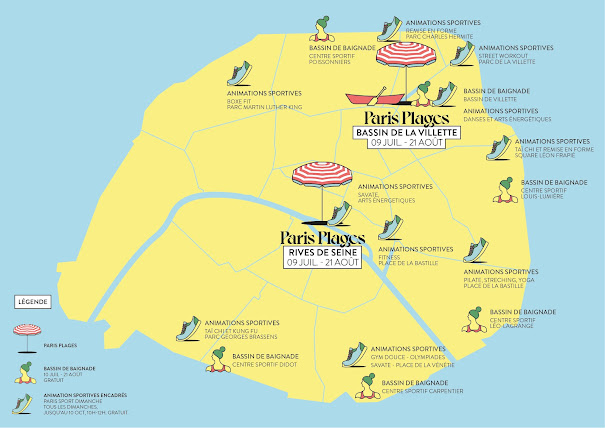 A friend of mine is stuck in Paris for the summer. She doesn't mind it because she likes having the office to herself, so I figured I'd help her out by giving her some ideas to enjoy the shittiest time of year, but also an event filled time of year. I think Paris knows no actual Parisians are here, but tourists are, so they put on a big show. When you live here you know the truth.

Anyhow I made a post last year but I know people don't scroll. The events are basically the same year end, year out. I'll make these individuals so they're easier to search for.

First summer idea, the Paris Plages. Oddly enough they're only there for one month (July 9th to August 21st) not the entire summer. This year they began at the end of Fashion Week. I don't group the one near the 4th with the one at La Villette, but apparently it is so...

I am a bougie snob (I am constantly being called bourgeois by every French), when one lives in the 7th, one has discerning taste, but the 19th around La Vilette wasn’t terrible. Not my favorite but not New York in the 80’s. Apparently it has drastically changed since I lived near Louis Blanc. My French bestie (born and raised Parisienne) is always telling me about Stalingrad being a hellscape now. She sent me the articles about the woman who was raped in the street. I had not heard about that. In 8 years I've never run into problems (knock on wood), so just stay way from the overhead bridges at Stalingrad (to the south of La Villette) towards La Chapelle if you’re anxious about it. With the activités I doubt there isn’t a heavy police presence.

Here's the link to information here. I feel like Hotel de Ville will have more American tourists, and La Villette will have French people who can't afford to get away for the summer so different vibes. Pick your poison.