You Gonna Run Game, It Don't Ever Run You 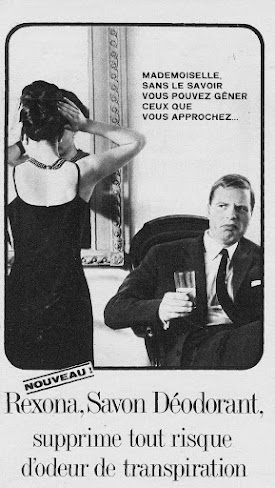 I’m a generally unhealthy person. My motto is “you’re gonna die someday” so I enjoy everything that life has to offer while I’m stuck on this spinning rock. But some things I will not partake in, like the microwave, plastic, and deodorant is a strictly social activity. Don’t ask me why I have these hang ups. I guess I’ll die of some kind of cancer, but it won’t be that kind.

As I fear the cancer from whatever chemical is in deodorant (but not enough to make myself a social pariah) I don’t partake at home. Me, myself and I will stink all we want. But around other people? That's a no dawg.

So I had kind of forgotten that French deodorant is basically useless. Despite my boycott of L’Oreal products, I have to use La Roche Posay for cleansing (but Cica Biafine for moisturizing) because my skin can no longer tolerate other brands. I bought one of those duo packs of their deodorant when Monoprix was having a sale. French roll ons are sickly sticky, but their aerosol deodorant is my jam, even if it's definitely killing the ozone (and giving some form of lung cancer). It may kill all of the oxygen in the room when you spray it, but.. 🤷‍♀️. Then whilst at home (thankfully), I started getting musky and I was like “hmmm something in the milk ain’t clean”. Until someone mentioned French deodorant and I remembered the French suck at it.

Story time, back when I was poor in pre-Covid Paris I used to have to ride the metro, and I know where your mind is going but nope this was dead winter. And not the climate change winters Paris has now, this was back when it would get 30 degrees or below. And I was riding along, balancing at every stop because I don’t like to touch the rails, and some dude came in. I got squished against the doors and had no means of escape. I had to endure. I'm not being facetious when I say it was odor most foul. He wasn’t homeless or anything, he was straight up legit. On god that B.O… I’ve only smelled odor that bad in France. People don’t be smelling like that in my America. Sometimes cancer causing chemicals ain't so bad ya know?

Anyway it’s that kind of anxiety that lives with me and ensures I never, ever skip my morning, night and (summer) day time showers. Thankfully I brought a bulk pack of Secret roll on so I’ve had to stop using my La Roche lung cancer causing aerosol. But just in case you’re wondering why your deodorant seems to be failing, no you’re not eating something that’s making you extra stinky, it’s the lack of chemicals in whatever the French put in their deodorant. Stay ahead of the game and Costco bulk buy the American stuff before you get here.