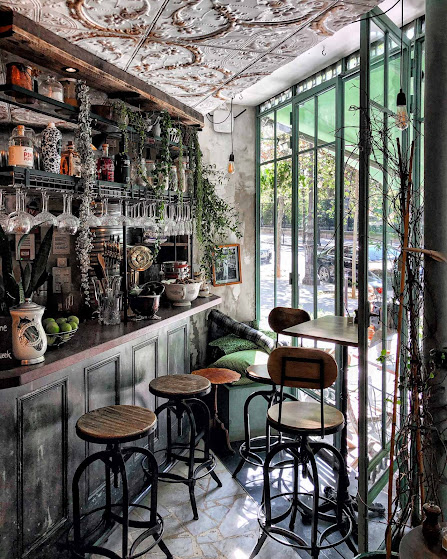 Once a week my girlfriends and I meet for drinks and lunch/dinner. We meet around 1pm or so and then go at it until 1am. I'd like to think our version is a mature pub crawl, because we don't go to pubs because we're not 20. We go to restaurants and grown up bars, sometimes fancy hotel bars. We usually pick an area and then move our way through whatever looks good.

One day we were meeting for brunch and having a hard time finding a place. I don't know what it is about Paris but it's always so hard to find a good restaurant. I know it's Paris, food mecca blah, blah, blah, but there's never a place that's perfect. Except for maybe Ricci (real pepperoni pizza), but I've been going there since 2018 so it's probably more comfortable than ‘perfect’.

Anyway as an American I love an American breakfast. It's not always easy to find (I hate that they turned Marlon into Marcelle because that was one of my favorite places). You can get diner fare at Breakfast in America, or something vaguely American at Twinkie, but rarely do you get an "American" breakfast (eggs, bacon, sausage, hash browns and/or pancakes or waffles, bonus points for French Toast).  I knew it was going to take me forever to find something.

But then! I was scrolling through those dumb lists and found Treize. For whatever reason we hardly ever go Rive Gauche (unless it's to go to Ricci or the Seine bars), but the menu said they had a lot of cocktails and really that's our main requirement.

It actually turned out to be a good pick because it's a Southern American restaurant. For those that aren't American, Southern is anything from a state apart of the Confederacy during the Civil War, not the whole Southern half of the US (and for some reason they put Texas on that list, but Texas does not consider itself Southern). They serve a lot of gin cocktails, since gin gives me a headache I had to stick to bourbon and a bourbon cocktail is a strange creature... They serve actual cake, and I didn't get to try it but something called Pecan Crusted Chicken. Be still my Texan heart, anything with pecans is a win.

So next time you're jonesing for an American fix, but Southern style, I recommend this place (they even have biscuits). The owner is American, so it's traditional. Not fusions or inspirations, but actual Southern food (sweet potato hashbrowns instead of potato for instance). Plus it's right on Luxembourg so it's a pretty spot, and when you're done take a little walk down to Odeon theater for a drink in the square.