Want You To Stay, Want You to Be My Prize 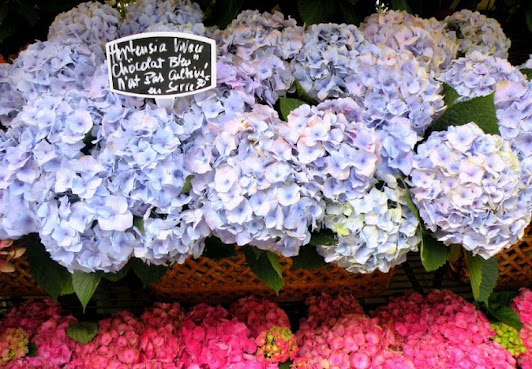 I knew I made it when I could live my dream of buying fresh flowers every week. I guess it’s not really hard to do here. You can be poor in Paris and still afford weekly flowers (prices are good). It helps that there are flower shops like every 100ft. It is aesthetically one of my favorite things about the city.

My favorite shop is the fleur store on rue Cler. Rue Cler in general is one of the nicest streets in Paris. It’s a true market street. Lots of expensive wine, cheese and fish shops, on a small and cobbled street. Very evocative of Paris past. There’s a reason it’s famous.

One reason I prefer the shop on rue Cler is partially because I am lazy, and it’s 3 minutes from my front door, but also because it’s larger than the average flower shop. They almost exclusively carry a large selection of my favorite flowers (hydrangeas, peonies and tulips), and their prices are really good, dare I say cheap. I discovered it 6 years ago and the fact that it still exists, when everything else in Paris is so transient, attests to that.

I don’t know if that little groundhog saw his shadow, but he must not have because the weather has been amazing this winter. Or maybe I’m just in a great mood because I didn’t experience a winter this year. It has been unseasonably warm and sunny, and ideal for planting, so despite it being February, I wanted to see if I could find any potted hydrangeas at my favorite shop.

Hydrangeas are my favorite flowers (at heart I’m a Stepford wife from Connecticut), along with peonies and tulips, but I can't with bulbs. I don’t enjoy gardening, and I don’t have the attention span to keep up with it. For me everything dies. Plus I didn't have the foresight to plant in Fall anyhow. As I have flower boxes on my balconies, I really wanted something to give them some color, and Paris always brings the hydrangea love. My apartment is street view, near the corner of a very popular avenue, so it is a heavy traffic area. Everyone can see them as they walk past. I think Paris looks so much prettier when everyone has flowers on their windows.

Now I would actually have preferred bougainvilleas for the windows, but I’ve been told over and over that bougainvilleas cannot grow in Paris because of the climate. How pretty would that be draping down from windows? France is such a buzzkill. Geraniums are also an option, but I hate the smell of geraniums. I despise them with a passion.

I guess the flower shops weren’t prepared for the unseasonably warm weather, and they didn’t yet have any potted hydrangeas in stock. Only fresh cut. As usual Cyclamens were the only potted plants available. Cyclamens (and hyacinths) are always available.

As pretty as the color is (especially those deep reds), I really am a sucker for a hydrangea. Hydrangeas are also a fuller shrub so they give you some privacy. Which can be helpful because everyone in Paris leaves their windows wide open. Besides I know I’ll feel a little tinge of happiness when I open my curtains every morning and see hydrangeas, so cyclamens were out. The search continued.

I then thought that I might try Castorama, but their selection is always restricted (because of the size of Paris stores). I figured if my flower shop didn't have them, Castorama with its limited to the street plant center, wouldn't have them either so no need to waste time walking over to Bir Hakeim.

I also gave thought to the flower markets on Ile de Cite (and there are many stores lining the Seine in the 1st), but I’m not going to drag myself over there at 8am to haggle with French people. I figured it was probably too early in the season to expect much anyhow and why not try to find a direct supplier? That’s when I discovered this store: www.jardinpourvous.com. They deliver flowers from the Netherlands direct to your home.

I know what you’re thinking because I thought it too; sounds like a scam. But I decided to try them out. If it didn’t work, I’d call my bank.

I really do love that technology (and Covid) has made it possible to have everything delivered. The website mentioned a money back guarantee, so I thought they must be sure of what they sell. The prices were enticing (4.50€ a pot), and they had potting soil and fertilizer, in stock so I could order them all at once. That helped woo me.

I placed a small order at first (2 potted hydrangeas) on a Monday night. I figured a smaller order would give me a chance to see if they were legit, and how well their plants looked when they arrived. I just cannot imagine sending potted plants through Chronopost ends up well. And don’t even get me started on Chronopost either. I have never bought something that was shipped by them that actually arrived. Awful company.

Jardins Pour Vous messaged me the next day at around 6pm to let me know they had shipped my order. A quick turn around is a good start. It gave me a bit of confidence.

But that changed when I received them. My Chronopost guy is an asshole. He constantly looks like he hates the world. And when he showed up he was holding the box from the wrong side up (it had arrows and everything). The boxes themselves were quite small, and when I opened it.. well they were basically seedlings. This is probably fine if you're patient and willing to give them some time. But I am not.

Since that didn't work out I then looked into ordering from ManoMano (a brico). They had some in stock and the photo showed a leafy plant. After being told by Jardin Pour Vous that it was winter, 2C in the Netherlands, and therefore hydrangeas are not in bloom, I messaged them on Twitter to ask. They informed me that the plants would arrive but only with green leaves. Slightly better than Jardin Pour Vois but not what I wanted. That nixed that.

Then one night I thought to myself 'why don't you ask them when they'll have 'horetense' in stock'. So I walked on over to my go to store Cler Fleur and wouldn't you know? Hiding on the corner on the rue Bosquet side they had a cart to the ceiling with potted hydrangeas. Beautiful giant sizes (20cm) all in bloom. They were perfect. I was so happy. 20€ each. I bought 6. 2 for each box. Though I was a bit worried that 2 in a box isn't spacious enough, but the women at the store said it should be fine…

Now my only concern is keeping them outside and how big they'll get. Hydrangeas are a shrub and they need a lot of root space. The rain (and pollution) in Paris is also bad for their PH levels. Hydrangeas change color based on alkaline and aluminum in the soil. I once went out of town and left my indoor hydrangea on my ledge to ensure it got adequate water while I was away. When I came home (after a week) my white hydrangea had turned green from Paris rain water. White hydrangeas aren’t supposed to change color so all I can think is Paris rain water is really toxic. It hasn’t been rainy at all for months (which is really weird), but even if I water regularly with Mont Roucous (yes, I annoyingly use bottled water for everything), I wonder what the rain (if and when it finally starts to rain again) will do to the colors.

And I'm pretty worried what to do when I’m away. The last time I was out of town I ended up traveling for longer than I had planned, and my orchid died. I’ve thought of hiring someone to water the plants, but I don’t really want a stranger in my home. I have trust issues.

The other option is to buy automated feeders. Since that is going to be my first step, I’ll definitely write a post about them later. My only fear is that I’ll need to fill pails of water up in order to have enough water and what if the water somehow spills? It might end up being an implementation nightmare. But more on that in later post.

If you're interested in investing in some jardinière suspension for your balconière (yes, that's the name and it took me a long time to find it out), I would suggest Cdiscount. That's where I ordered my Elho 80cm boxes. Elho is pretty pricey, and even 80cm boxes can be up there, especially if you need them in a depth of 20cm, which is what I needed. But I found that Cdiscount had the best prices. You can also try Leroy Merlin, ManoMano, and Le Redoute. A flower store on avenue de la Motte-Piquet sells them outside with their plants, so certain flower shops may have them as well.

I suggest really paying attention to the measurements. I initially purchased what I thought was at a great price, and they were only 8cm deep. Since my landlord’s son had left one box here I was able to see how small it was in comparison to the ones needed for the racks that are installed on my apartment. Now I'm stuck with two boxes I won't need. And some boxes are more heavy duty. The cheap ones are obviously the wire ones for like 30-40€. I didn’t have to pay for my racks, as they were already here, but when I priced my boxes, I found out they were over 100€ for the type of kit installed on my apartment (there are 3 total). Gardening in Paris can get expensive.

For dirt and things you can also try the aforementioned shops. But one surprise I found was that Monoprix sold dirt too. I ordered a 50L bag in the end from Amazon (anything more than 6L is hard to find), but I was glad to know next time I put in my weekly grocery delivery, I can add in a few bags of dirt. Assuming I’m in a pinch. I’m still trying to find the French equivalent of Miracle Gro…

If there are any other hydrangea lovers in Paris I could really use some tips and tricks. I joined a hydrangea group but none of them live in Paris so have no idea what plant care in the city entails. One person also shamed me for buying what I can only assume is the puppy mill equivalent to flowers. She said my plants were ‘chemically induced’ to be sold by for profit florists, and one should only buy from reputable nurseries. Apparently woke flowers are a thing 🙄

Please feel free to use the contact form to message me. Living in Paris is such a unique situation for growing and taking care of plants. I doubt many hydrangeas are used to growing while suspended in midair.