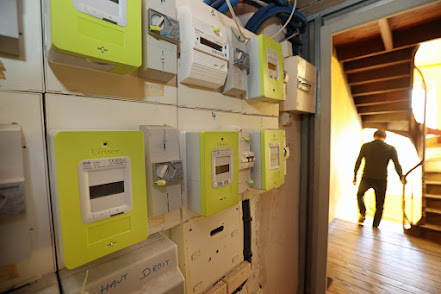 You know you’ve gotten old when you start caring about the cost of your electric bill. I’m not terribly wasteful (she says in American). I turn lights off when I’m not using them, but I have this annoying habit of putting the heater on and opening windows. For years I’ve heard French people express how expensive heating is. “Watch your bill, using heat is expensive”. And then I got my bill and was like “huh, I guess they were right”.

Which brings me to my quick tip. If you download the EDF et Moi app you can see a day by day cost of what your electric bill is and how you spend it. I don’t pour over it everyday, but I like to look at it when I’m on holiday and scold myself for forgetting to turn something off.

You have to have a Linky meter to use the feature. I’m not of the tin foil hat brigade so I don’t care about having a Linky in my house. I won’t even get into that debate. You’ll know you have one because it’s an electric meter (and bright yellow green), and not the old school turn dial ones.

When I moved into my apartment it didn’t have a Linky. Enedis showed up one day and installed it. I don’t know if they asked to do that. When I lived on Passy ('19) they notified all of the tenets about installation, but I was on holiday, so I was the only person on my floor who didn't get one.

In this apartment I didn’t set up my electricity. My agent is really sweet and spent a few hours setting up all of my utilities for me. They may have said something to him, but he never said so I had no idea they were going to do it. He just told me be home on this date because someone is coming . They came, they installed it, and they were on their way in 5-7 minutes. 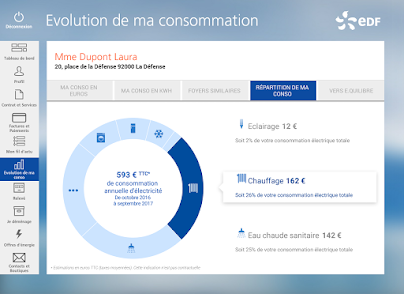 Next time you're curious about where your money goes, peruse the app (under Ma Conso). I’ve learned quite a bit from using it. My electricity bill which is usually less than 25€ a month shot up 90%. I learned 60% of that was my chauffage and 16% my water heater. I’m guessing the rest was my washing machine since I a) don’t cook and b) wash a lot because I have a wasteful American mentality whereby I will decide I need this one item now rather than wait to do a full load of laundry.

I'm curious to know how they know what appliance is using what. But it was pretty eye opening. For instance I only turn the heating on in my living room. I think I only had it on for a week, two weeks max because the weather in Paris has been humid and muggy. Before I moved in my landlord renovated my flat so the heaters are all slick and brand new, but my living room is large (20sqm), and it takes forever to heat it. I’ve never opened the windows while the heater is on because it doesn’t get hot enough. Since I only use that room when I’m working, I tend to turn it off and on instead of leaving it on Eco. Apparently leaving it on Eco is better than turning it on and off on Confo. #TheMoreYouKnow

It’s made me question a lot of things for sure. Now I want to do experiments. Like how much does my air purifier cost me if it’s always on while I sleep? I can see how people can get obsessive. I’m currently spending .69c a day despite not being in my apartment and for some reason that irks me. Now I understand Julius 😕

In any case, I’m kind of glad I’m not home in the winter. While I do miss cold weather (and jackets and sweaters. 80 degree Christmas is no bueno), and I hate when my apartment sits empty for weeks, it also means I’m not home when it’s cold, which means I don’t use the heater, and in turn I don’t have to pay EDF hundreds of euros. That’s my same thinking in the summer (A/C is more expensive than heat?). I will never spend another summer in Paris.

I highly recommend second homing it or holidaying for a few weeks- few months in the winter and summer (definitely leave in July and August), if you can. Those are the worst times to be in Paris, and decamping to another home for a month or two makes you appreciate Paris more. I do worry about leaving my apartment for so long, but I’ve rigged it into a smart home so I trust Siri to do his job… the Home app really is convenient, and makes traveling away for weeks at a time so much easier. Now if only the city would give me permission to install a smart door lock so I can stop being anxious about losing my house key when I’m away… (more electricity to consume and more money in EDF’s pocket).

So next time you’re wondering what’s up with your electric bill, make sure to check the app. I don’t know how homegirl above can spend 593€ a month (in La Défense so no doubt a high rise from the 70’s), but if I was her I’d definitely be eagle eyeing that app. It’s just so convenient. I’m not obsessive with budgeting (I spend how much a week on Uber?). I’m not even someone who budgets, but the EDF app has changed me. Caring about the electric bill, a sure sign that I am well and truly old.