Water, Water Everywhere, Nor Any Drop to Drink 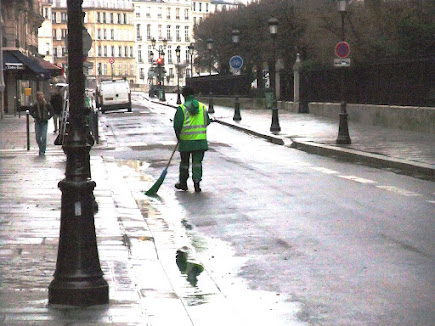 This is a post about water (not Coleridge's masterpiece). Not Paris’s world famous drinking water, which every French will proudly tell you wins awards, has it's own Twitter, and is the cleanest in the world. Nope, this is about street water.

I guess it never occurred to me that most people have no idea what’s happening when the streets start pouring it out from the gutters. Once you’ve lived here long enough you no longer notice it. I can’t remember the last time I saw it, but it happens everyday so *shrug*

No, Paris isn’t flooding. After having lived through two floods? Three floods? I wouldn’t give you a hard time for thinking it. I used to think it. When they start with the Apocalyptic prophecies every time the water gets a bit too high, and Zouave starts drowning, I do have visions of riding around Paris in little row boats © Thom Yorke

But if you’ve been around when the floods happen, you’ll know that the Seine itself is so far below the actual streets, it’s amazing it could ever get that high again. We’re talking 30+ feet of water. And if you’re in Montmartre, Passy, or Monge you’d never see it anyway. If you’re buying a house it will be a big part of the buying process though.

What you are seeing when the waters start flowing is street cleaning day. If you walk a bit up or down you are bound to see the men in their little green vests with their green brooms sweeping along the gutters. It happens daily. You get used to it, so it's hardly noticeable.

And oddly enough some parts of the city don’t get it as much as others. For instance Boulevard de Beauséjour, which is one of those streets in the 16th with the massive fancy buildings facing the Petit Ceinture. I used to walk down it everyday on my way to work, and because it’s a street with trees on the other end, in the fall those giant, beautiful, orange, Paris leaves would clutter the streets. Everyday I would wonder why they never cleaned it because after a few weeks they’re dead, and brown, and ugly, and sometimes slippery. And there are a lot of old people in the 16th (the 15th and 16th are Paris’s nursing homes).

Meanwhile in the 7th, on La Tour Maubourg and Bosquet, I would walk through them everyday crunching away, but the next day? Gone. They remove them so quickly. Both neighborhoods are posh neighborhoods, albeit the 7th is more expensive per sqm, but I guess because Beauséjour is hidden it gets less love.

And if you’ve ever walked around Pigalle, one of Paris’s lesser loved neighborhoods, you’ll be ankle deep in them. I highly suggest going here if you want to feel like it’s Autumn (it stays hot so much later in the year now it hardly feels like it all all). A lot of people say those neighborhoods are blights on Paris, and English people will no doubt point to it as another example of Paris being shit, and if they could afford to live outside of Belleville they would realize there are other parts of Paris, but those areas of Paris were always my favorites. They’re grubby and dirty, and more real. But guess what? They also get cleaned regularly too. About once a week when I walked home from Abbesses metro to my apartment on Androuet, the shortcut was the staircase through Passage de Abbesses, and despite being a dead end car park, they’d be there with their little brooms cleaning away. 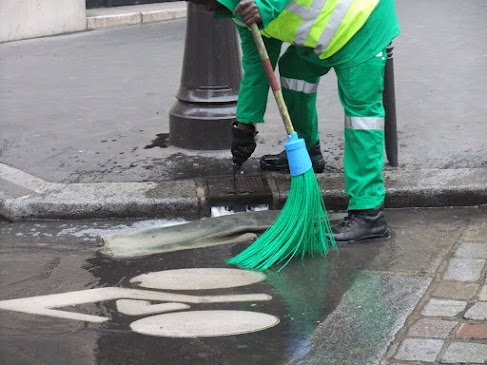 What they do is put the carpet blockers out to control the flow of the water. They then use a metal stick which they stick in the little holes in the manhole covers and turn on the water (see above). They let it flow while they go down the street sweeping away the debris.

Not to be a complete history nerd, in addition to an English nerd and a Literature nerd, and when you combine them... well we could debate The Rape of the Lock all day, but the process started because love him or hate him Haussmann and Napoleon the Trois created two systems; one for drinking and one for non-potable water, which is a concept novel to Paris (most cities only have one). It is also ecological, so don't fret and think Paris is just really, really wasteful. The system is a closed system, meaning the water comes from the Seine, gets cleaned, and is reused. You wouldn't seriously think Paris would do something that wasn't green? Jamais!

I have a few books on the “redesign” of Paris. It may not seem like a fascinating subject, but it is, and I would recommend looking them up to anyone who wants to know more (some reqs are in the library). It is a shame that medieval Paris was obliterated, but it led the way to what made Paris’s infrastructure the most envied in the world.

If you’re more of a show than a tell type person there is also the Eau museum and the Sewers Museum in the 7th. I haven’t gone to the Sewers museum yet, as it’s temporarily closed for renovations, but it is on my list. I heard about it for years, but come on “Sewers Museum” sounds a bit lame. However after reading 20 books on Paris’s redesign I began to see what all the fuss is about. There is a world below the streets, and Paris offers more than a few museums to help you learn more.

Another one on my list is the abandoned railway stations (called Ghost Stations). I'm not that interested in the metro itself, except for the 4 and B which go under the Seine, but Paris has a lot of stations that were abandoned or never used. Some of them useful (Petite Ceinture) so no idea why they were closed. For special occasions RATP will let you visit some of the abandoned ones (or you can find guides on how to enter them illegally). The posters for those events are usually announced on the metro and in buses (on the barriers behind the doors and behind the driver). Sometimes they do a ghostly Halloween special event type thing. But as the French don’t like being scared, it is rare. I’ll try to post more about that later.