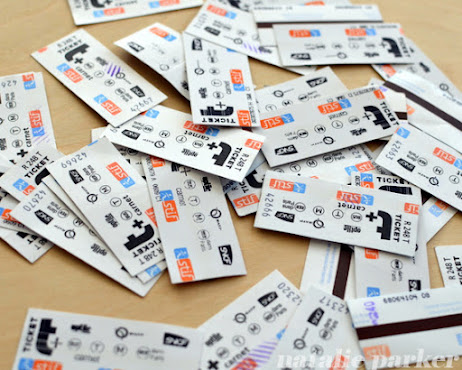 I never really bought metro ticket books (too rich for my blood), but they were cost effective. I think for every book you received one free ticket? Don’t quote me. Well it is now over for the book. RATP has stated that come October they will gradually phase them out at metro stations.

This isn’t all bad news, if you still have tickets, the tickets won’t expire, but you will no longer be able to buy them in book form. Instead RATP wants you to get a Navigo.

The thing about the Navigo, I never remember to refill it. It’s just such an inconvenience. You're at the metro because you're rushing/getting on the metro, most people don't show up beforehand with an extra 10 minutes to fill it up. And some of the machines are so old they don’t even have the place to place the Navigo and recharge it. Usually it’s at only one of the two machines, and someone is always taking their sweet time looking up tickets for the suburbs on the one Navigo machine. It's also the one machine that doesn't accept cash so in other words useless.

Of course you can always buy tickets from your phone, but that’s only for Android users (Paris would be a haven for Android 🙄 on brand). But the thing is thieves abound in Paris. I have had my cell phone snatched on an 8 train. I paid $1200 for my current iPhone and I do not trust ever having it out on the metro. I have theft protection on it but that's only if it's stolen in America or Japan. I’m not about to try it at the gate. And if you don’t think thieves are at the gate, I dare you to try it at Barbes. I was once going through the turnstile and some asshole tried to snatch it from my pocket. The only thing that saved me was that my wired headphones were stuck in my head so I felt the tugging. You better believe I punched his ass. Ugh Barbes.

We’ll see how this plays out. For years Paris has been threatening to get rid of cardboard tickets all together. I once dated a guy who worked at the Mairie and I told him they should change to something that dissolves because more than once you’ll see those spent tickets lying in the gutter. I'm shocked they still haven't found an alternative. As Paris is all about the green it must kill them to know that so much waste is created from those little tickets.

But every time they have threatened “no more cardboard tickets”, go to any metro and you can still buy them. We'll see what kind of outcry this announcement brings, and then check back in October. They're very good at saying one thing and doing another.