Money is the Anthem of Success So Before We Go Out What's Your Address? 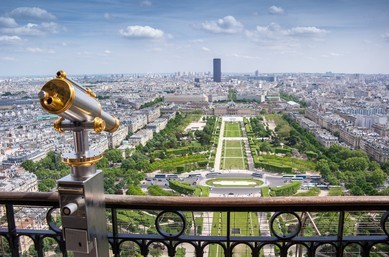 Paris is blessed with a lot of parks. Like a lot, a lot. You can probably find a park every 500ft. Sometimes they’re listed as squares, sometimes (rarely) they're hidden. In some cases people are blessed with larger spaces like Tuileries, or Buttes Chaumont, or in my case Champ de Mars.

If you’re interested in buying or renting I’m not really sure how high property value is. For Champ de Mars I’ve heard the buildings bordering it are the poshest in all of Paris, but also most Parisians will tell you to avoid parks as they attract rats, and in turn your building is the closest to ground zero. Which means that all of those fancy buildings have to work extra hard to avoid them.

When I lived in a building bordering Luxembourg I never experienced that, but I was on the second to the top floor, and my Gaurdian cleaned the building every. single. day. I imagine that owning in one of those buildings is nice on paper, but most Paris parks aren’t Central Park. Maybe it’s because there are so many, the exclusivity is lost. Unless you’re owning on Rivoli (which is coveted for an entirely different reason), I’m not sure it’s worth it.

That said Champ de Mars is probably my least favorite park in Paris. Which is sad because I live so close to it. That should be a reason enough for me to spend a lot of time in it, but as far as parks in Paris go, it doesn’t have a lot going for it.

That's another thing, you need to get out of the American concept of what a park is. A parc in France is basically just a large area for you to stroll in. It doesn't come with all of the fancy bells and whistles American parks come with.

One reason Champ de Mars isn't my jam is the number of tourists. They’re all there taking photos of the Eiffel. Day and night they’re there. In the summer is obviously the worse, but thanks to climate change, as the days stay sunnier and warmer, the more people hang out on the grass. There’s never an off day. Even in the winter they’re hanging out on the grass. Paris usually closes off the grass areas from October to April. It used to be they would put the fence up on all of the areas (Champ de Mars is broken up into 3 because of the road and foot path that run east to west), but now they’ll just fence off two and leave the one closest to Ecole Militaire open. Which encourages people to hang out.

Because of the tourists in the area, the park is always full of African migrants selling stuff. You can’t enjoy more than 5 minutes of peace and quiet without someone coming up to you asking if you want to buy a keychain or a bottle of overpriced water or booze. Because the walk to shops is so far (because of the size of the park), maybe it’s not always a bad thing. But it’s still annoying. I once went on a date and every time the guy began to speak a guy would come up asking him to buy something. The guy got so pissed I thought he was going to get fed up and just clock one of them. 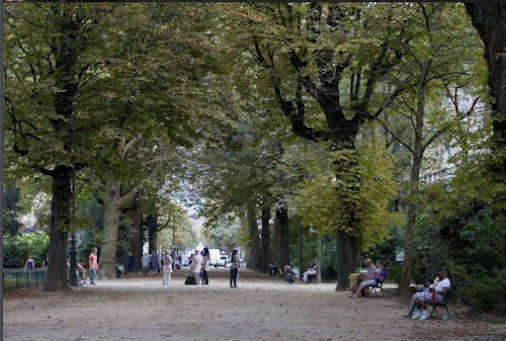 Seating in the park sucks. Because of the number of people, and because of the wide areas of grass, benches can be few and far between. Paris grass, for whatever reason is always wet, so if you decide you’d rather just find a bench you’ll have to look in the footpath areas. If you’re looking for some peace and quite the areas bordering the buildings are quieter, but the view sucks, and they’re covered in trees so you won’t have the sun to warm you. It can get pretty cold.

I also find that there aren't as many activities for those 6 years and older. Mostly it's just good for sitting. You can't play tennis in it (Luxembourg), you can't boat in it (Bois du Boulogne), and the paths don't call for much endurance (Buttes Chaumont). If you're just using it for sunning, the Esplanade des Invalides is far better (less people, no shade).

That said there are some good aspects of the park. If you have a dog Champ de Mars is great. It’s probably the only park in Paris where you can find that many dogs. I don’t know if apartments are bigger so people keep dogs more than, or if the park is just so dog friendly the people flock there, but dogs abound. You will not see more dogs in any other park in Paris.

If you have kids, Champ de Mars has 4 playgrounds. Two of them are right next to each other closest to Ecole Militaire. One has the swings and the merry-go-round (I forget the name), and the other is closer to the Eiffel before you get to Avenue Bouvard.

If you want to find a bus, this is also a pretty good hotspot outside of a Gare. Most of the buses are on Avenue Bouvard which can be a bit of a walk, but a lot of them run through or end there. My favorite bus being the 69 to Gambetta. It runs along the Seine to the Marais. I’ve never ridden it past Saint Paul, but on the way back it runs along Rivoli, and as Hôtel de Ville is a place I frequent, it works for me. I use it as the quickest way to the Louvre or the Marais.

In the summer you will have events like Longines Global Champions Tour (the horse competition) which is held every June. You might not realize this but the French are just as horsey as the Brits. Of course Bastille Day is another yearly event. And there are more but I honestly cannot remember them all. Currently the Grand Palais has set up a mini Grand Palais. It’s crazy because it looks like a fully constructed building. But once Fashion Week, or Nuit Blanche, or whatever reason it’s up (I don’t pay attention) is over, it will come down.

But if I had to pick a parc, hands down Luxembourg would be it. Ideally located and a variety of scenery and things to do. The irony is when I lived there (for 2 years) I hardly spent any time in it.

If you're still thinking you want proximity to a parc, Parc Monceau is on par with the toney 7th. I lived there for a while. The entire area is home to bankers so is just as exclusive, but it doesn’t have nearly as many tourists. Trocadero is also exclusive, but "exclusive" for the 16th, so not quite on par with the 8th or 7th. Plus lots of rats and thieves.

Buttes Chaumont may not be the most ideally placed, but the apartments in the area are pretty cool (warehouses and lofts). If you don't mind the distance, parc Montsouris is one of the bigger ones, though without as much to do. I won't even include Bois de Vincennes as nothing notable is outside the periph (Vincennes isn't as big as it looks on the map).

Bois de Boulougne is huge, but also outside the periph, and you gotta deal with prostitutes who flash children as they walk by or who have sex in the bushes. Plus murder by Frenchmen who kill said prostitutes. Unless you're looking for France's answer to a modern day Whitechapel (but posh) probably best to avoid.

If you’re a tourist Champ de Mars is no doubt on your list of things to do. If you’re a childless resident you probably avoid it like the Plague. Everyone will have their own opinions of it. But if you’re thinking about buying or renting my advice would be to pass.