From the time we were in each other’s lives (May 21, 2018 to May 1, 2020), numerous times throughout, I tried to cut off contact. You can tell someone your needs, and they can ignore it, and you should walk away. I’ve done it countless times to others.

But the love I had for him was immense. I can say “I loved him/I love him” until I’m blue in the face and it could not convey enough just how much. Until you’ve been that in love with someone, you can’t understand it. I would have done anything for him. He was my whole world. I had never, and have never, loved something or someone so intensely.

But when I would end it (and promptly turn off my phone to keep myself from running back to him), he would send videos. Despite my efforts, I couldn’t ignore him.

How could I? I loved this person. I never wanted to leave him. I forced myself to do it because I wasn’t getting what I thought I deserved. And here he was, in pain, asking me to stop hurting him. Time and time again he would say we’ll always be in each other’s lives, you can’t ignore me, you can’t block me, I will never leave you. If you try to leave me, I won’t let you. I had never had someone hold on so strongly, fight for so hard, or do everything to stay. All I ever wanted was for him to stay. If he stayed that meant something?

So I believed every word of it. Even if I wanted to stop the emotions I felt, by cutting off contact, he was right, he wasn’t just my boyfriend, he was my best friend, he was all that I had, and I couldn’t block him. I never had the strength to. I still don’t. I have never blocked him.

Even now, even after everything he’s done, I can’t see him in pain. I can’t hurt him. Hurting him hurts me more. And I wanted to believe that if he said those words, and it affected him so much that he’s hiding from his brother, crying in a bathtub, or sneaking off to a conference room at work to beg me to stop, then his emotions were strong, and they must be true. He never cried so the emotions he was conveying had to be real?

I wanted to believe it so badly because I couldn’t be without him. “Sometimes I wonder if the sad I’d be without you, is less than the sad I get from being with you” and the sad from being without him was always stronger. Even if he made me angry 9 times out of 10, I’d choose that 1 out of 10 every time because the 9 out of 10 was worth it for the 1. Anything was worth it to be with him. Anything was worth it for the happiness he gave me even if he made me sad. And so I always caved. Because why would someone lie? 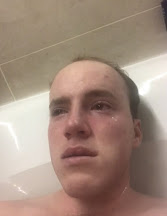