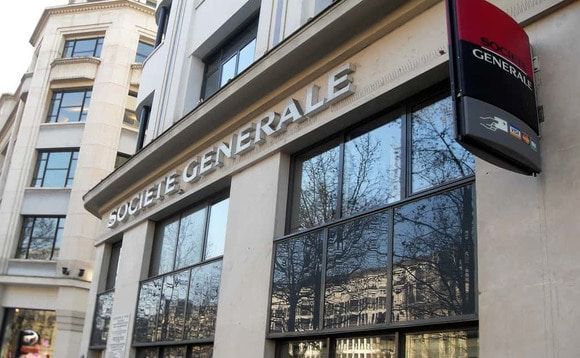 Setting up a French bank account is fairly simple if you have the right documents and the patience of a saint. If you are a student your school will do it for you, but for everyone else you'll need to prepare yourself.
When I first started working I thought easey peasy I can just cash my checks without having an account. Wrong. Unlike in America, France does not have check chasing places and you cannot just go to the bank that issues the check.
My friend Ellis and I showed up to work on payday all gleeful to be receiving money. We were told by our company that our checks can be cashed at CIC. We promptly went to CIC and were told "no". We didn't understand. So being Anglos (he English, me American) we thought any bank could cash it, for a fee of course. Nope. BNP, Société, they all told us no. Being in Bastille we had one bank left, Bank of France.
We didn't know what this place was because we're not French and we did not realize that it wasn't an actual bank. After all most of us don't just walk into the Treasury right? But we rolled up in there and jenga! BOF says sure we can cash this for you but we need a denial letter from a bank, a copy of your contract with your landlord, and your passport. Now Ellis, living in an illegal sublet could not provide the lease. Me, I could not provide the denial letter because I had never even tried to open a French bank account. And when I went back to BNP to ask for one they said it would take 3 months. Wankers. After going to 4 different CICs, and each time being told no, I decided enough was enough.
Just an FYI French banks don't have money. Meaning in America you can go in a bank, speak to a teller and receive money. Not here. Banks don't give out money. The backwards absurdity of the French system strikes again. If you by now stroke of misfortune and ever lose your atm card, which the French look at as some kind of shockable offense, you can get money but you have to go to your bank branch, and the bank has to have money. At this point lets just not even question the madness, let's just go along with it and make our lives easier.
So my boyfriend being a banker tells me to go to his bank, LCL. Even though he doesn't technically work in a bank branch, he works in La Defense, I felt uncomfortable banking with his company, something about business and pleasure, and I decided to forgo his help. Because I'm stupid.
So I walk into Barclay's and am told I cannot open a bank account without a rendezvous (rdv), yet another French absurdity, their love of appointments. So I made one. I show up a whole week later, tired by the process, and living without money, only to be told by Barclay's "who told you you can open an account here? We only do investments in France". Motherfucker! I hate more than anything anyone telling me what I can do with my money, and here I had a check for money I could not touch. I was pissed.
So on my way home I decided fuck it, I'm going to go across the street to Société Générale and ask for a rendezvous and learn to love to eat pasta everyday for the next week because I have no money.
The French gods must have decided to have pity on me that day (after dicking me around for 3 weeks) because when I went into SoGen they said I didn't need a rdv. He said "come back at 2pm and an English speaker will be here to open your account". Praise Marianne, things were finally going right.
I showed up at two with my file. He began to go over everything; "good you have your passport, good you have your titre de sejour (you cannot open an account without one!), good you have your lease (proof of your address, a must), good you have proof that you have a job (checks with attached payslips) but you don't have your tax returns". I asked him "what? I don't pay taxes in America". He said well even in France if you don't work you have a paper saying you didn't pay taxes. I told him in America it doesn't work that way, you are not required to file your taxes if you don't work or if you make less than 700€ a year. He said sorry but you need tax returns or proof that you didn't file your taxes, we cannot open an account for you until you can provide that. Why France, why do you hate me?!?
I went home dejected. While bitching at my boyfriend about how stupid his country is, a little thought bubble popped into my head. My mother filed taxes for me two years previously and I was sure I had a copy in my email because she had filed them online. I could not find it but I did go to the IRS website and lo and behold everything was there (companies upload your W2s these days). I immediately pdf'd a copy and sent it to the bank. (Side note your returns must be recent. They will not accept them if they are more than a year old).
After all that, and after he got approval from the bank that they could open an account for me, 5 days later I finally had a French account. It was 4 weeks of anguish, and living without money, but it was finally done. I had many problems later on with receiving the 50 million codes you need, online access, bank statements, etc but the hardest part was over. The French really love to make you suffer.